Leema's updated integrated amp sounds as good as ever... Tested at £4995 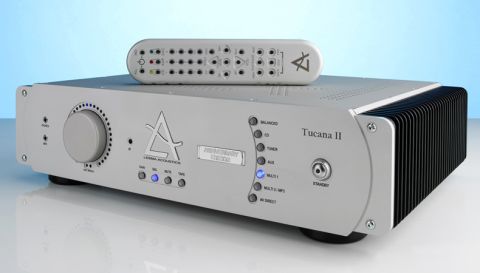 The Tucana remains a top class integrated amp. It’s one that works well across a wide range of systems and music

How time flies. In 2006, a small-scale speaker manufacturer launched its first electronics product.

The Tucana integrated amplifier, alongside the partnering Antila CD player, established Leema Acoustics as a purveyor of quality hi-fi electronics. The brand has hardly looked back since then.

Over the past decade the company’s range has expanded considerably, taking in more affordable electronics, high-end products and a wider range of speakers.

But the Tucana has continued to be one of the highlights of the company’s output. To celebrate those first 10 years, Leema has released an Anniversary Edition of the amplifier, and we couldn’t resist having a listen.
Build

At first glance there appears to be little to differentiate the Anniversary Edition from the standard MkII version. The casework seems unchanged, apart from the Anniversary badge and reworked front panel logo.

It remains impressive, though. There’s an air of permanence about the metal structure. It feels immensely solid and has an engineered feel to it – we like the heavily machined appearance, but some of the detailing has started to look a little fussy.

There’s no complaining about the fuss-free way the controls work or the confidence the hefty 18kg weight instils, though.

This Anniversary model comes with the company’s new Focus remote, a chunky metal handset that covers all system functions. It’s a little cluttered, but remains easy to use.

The control layout is logical, though the feel of the buttons could be nicer – the same could be said of the nice looking control buttons on the amplifier’s fascia.

As with previous Tucanas, this one can be integrated into a Leema set-up with the aid of LIPS – Leema’s proprietary communication system – so the stack of electronics operates seamlessly.

The Tucana’s onboard control system still allows for different gain settings for each input. This is useful when you want to equalise volume levels between sources that have wildly differing outputs – as, say, the signals from a typical phono stage and CD players can be.

So far this unit appears just like every Tucana before it. But delve into the details and you’ll realise there’s far more to this Anniversary model than just a new remote and a couple of badges.

Take the aluminium lid off and the circuit boards have been upgraded with twice the standard amount of copper in the tracks, leading to lower losses through reduced resistance and an improved power delivery.

Sound-critical capacitors have been upgraded to Nichicon’s Muse types, and all transistors are hand-selected for optimal performance and the lowest distortion.

The internal cabling has been improved too, by the use of the company’s Reference 2 speaker cable and the amp’s power supply upgraded with new, quieter mains transformers. There’s one transformer per channel in this dual-mono power amp design, with a third for the control circuits.

There’s plenty of connectivity here, as long as you don’t expect digital inputs.

While these are becoming increasingly common on two-channel amplifiers, built-in digital modules tend to be a box-ticking exercise rather than a real attempt to deliver top-class number- crunching performance.

Good-quality outboard alternatives such as Chord’s Hugo or Arcam’s irDAC II sound notably better than the digital modules fitted to most high-end amplifiers.

Stick with analogue and you have a plentiful supply of single-ended inputs (six, to be exact) as well as a balanced XLR option. At the front you’ll find a 3.5mm jack for use with a portable music player or phone (though not an iPhone 7, of course).

There’s also a tape loop and a preamp output for those that feel the Tucana’s 150W per channel isn’t enough, though we can’t imagine many people will feel that unless they have particularly inefficient speakers or an unusually spacious listening room.

Leema is quite explicit with its published power output figures, claiming 290W per channel into 4 ohms and a mighty 520W into 2 ohms.

These impressive numbers suggest the Tucana will be happy driving some of the most demanding speakers around. We try a range of options (ATC SCM50s, Sonus Faber Venere S and Dynaudio M20) and never feel the amplifier is anything else but at ease.

Each Anniversary amplifier is supplied with an individual passport, with each stage of the production process signed off by the engineer responsible. It’s a nice touch.

We’ve always liked the Tucana, and it takes just a few minutes of listening to remind us why. The upgrades are fairly extensive but the sonic character hasn’t changed, even if the sound has improved.

It remains an immensely robust-sounding amplifier – those impressive power figures readily translate into the sound we hear.

Play something large–scale and demanding such as the Jaws theme tune from John Williams and this amp shines. Its presentation is as solid as you like, supported by taut, punchy lows.

Those bass notes are unusually rich, though – rendered with pleasing texture and no small degree of agility too.

Look beyond the lows and you’ll find plenty more to admire. Dynamics are delivered with confidence as the music’s menace grows. Yet nuances are well handled too, the Tucana showing plenty of delicacy when the music demands.

We’re happy with the sound staging – this amplifier paints a suitably expansive stereo image and populates it in a precise and spacious fashion. The sonic picture remains stable regardless of how challenging the music gets.

Tonally, Leema has given this amplifier a slightly rich and full-bodied balance. The top end is smooth without lacking bite, so the amplifier tends not to emphasise the weakness of less than perfect signal feeds.

That’s a bonus for those who use the likes of Tidal or Spotify on a regular basis. Don’t think this tolerant nature means you can get away with less than ideal sources, though.

This is a hugely capable and revealing amplifier, and you’ll hear the true breadth of its ability only if it’s fed a top-quality source.

We play The Hand That Feeds by Nine Inch Nails and the Leema delivers the hard-charging beat with enthusiasm, keeping a firm grip of the insistent rhythms with skill.

There’s plenty of punch and power, but also the insight to unravel the dense production.

This recording is packed with energy, and the Tucana is transparent enough to give us a full dose. Push volume levels higher and the amplifier stays firmly in control, the sound refusing to harden until we reach antisocial levels.

We try PJ Harvey’s Dear Darkness and the Leema shifts gear effortlessly to deliver this sparse recording with conviction.

Harvey’s haunting vocals are rendered with a suitably light touch, the amp making the most of her distinctive phrasing. The song’s minimalist rhythmic beat comes through with determination without dominating.

There’s a lovely sense of space here, as the amplifier gives each sound plenty of space to breathe, and yet still manages to tie everything together to make a cohesive and musical whole.

The Tucana captures the feel of the song, putting the spotlight on the music while the hi-fi mechanics fade into the background.

The headphone output is good too, retaining the refinement and drive of the sound heard via the speaker terminals – not always the case even with amps as expensive as this.

We try both Grado’s PS500s and Sony’s Z1Rs to good effect, though dedicated units from the likes of Graham Slee do even better

While the Tucana’s price has steadily gone up over the years, so has its performance.

This version may not look all that different from the unit we reviewed back in 2010 but we think it still stands up well in today’s market.

If you’re after a premium integrated and want something that plays all types of music with equal skill you’ll have to go some to better this Anniversary model.

The homepage is currently being updated.